A popular and renowned museum throughout the world and located in Amsterdam on the Museum Square is the Van Gogh Museum. The Van Gogh Museum shows art dedicated to the works of Vincent van Gogh and other artists from the 19th century. Vincent Van Gogh was an artist for about ten years and created over 850 paintings and 1000 drawings and prints (the ones that have survived). The largest collection of art made by this icon can be found in the Van Gogh Museum in Amsterdam. The permanent collection of the museum represents over 200 paintings, 437 drawings and 31 prints. Vincent van Gogh wrote a lot of letters to friends as Emile Bernard, Paul Gauguin and especially to his brother Theo. The letters are a great source of knowledge about Van Gogh’s work and life and are kept in the Van Gogh Museum as well. Furthermore the museum offers many art exhibitions from the 19th century. 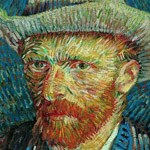 In 1853, Vincent van Gogh was born in the south of the Netherlands. Through his uncle, he started to work in a gallery in The Hague in 1869. This is also the start of him writing letters to his brother Theo. His appreciation of paintings and drawings came and grew through the years, while working for this company in London and Paris. Nevertheless, Vincent van Gogh realized he wanted to become a minister but did not succeed. In 1880, he moved to Brussels and tried to study on its own in becoming an artist. Then he took painting lessons in The Hague by a member of the family. Vincent van Gogh got his first commission from his uncle in 1882, asking him to produce 12 drawings of The Hague. From there he travelled through the Netherlands, got inspired and created many works. Van Gogh sent them to his brother in Paris hoping to be sold. In 1885, the first masterpiece was completed; ‘The Potato Eaters’. In this year he found his next home in Antwerp. Got inspired for nearly a year but without satisfaction and moved again to his brother Theo in Paris, who lived in Montmartre. His brother showed him French Impressionists like Monet and Gauguin. 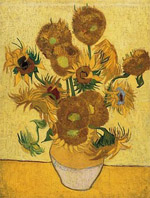 He got really inspired by these artists, the city and the country. Van Gogh started to use more bright colors, tried to paint self-portraits for a living and studied other interesting objects. He got even more inspired by the beauty of nature in Arles, where he headed with Gauguin in 1888. As a decoration piece for the room he painted ‘the Sunflowers’. In 1889, during a real tensed and psychotic period, van Gogh cut off a piece of his left ear. He ended up in a psychiatric hospital in Saint Rémy. During his treatment he created many works from within the hospital and can be significant as a period of masterpieces. He still sent all his works to his brother in Paris. He got complemented by other artists and got recognition by critics. In 1890, Vincent van Gogh returned north to Auvers-sur-Oise, close to his brother Theo. He felt happy in that period of time and created a painting a day. But after Vincent visited his brother Theo, the doubts and worries came back. Theo van Gogh told Vincent that he wanted to start for himself and therefore needed to save money. Vincent got deeply anxious and committed suicide by shooting himself through the chest. A few days later he died on the 29th of July, 1890.

After his death, all his works were left to his brother Theo. And he passed it on to his wife when he passed and therefore all the works stayed in the family. The next person in line was their son Vincent Willem van Gogh, who inherited all the works. The Dutch State wanted to establish a ‘Vincent van Gogh Foundation’. In cooperation with Vincent van Gogh, the foundation was started and in 1973 lends its works to the newly built museum.

Nowadays the two buildings (main building and the exhibition wing) of the Van Gogh Museum are renovated. Until the 25th of April 2013, the masterpieces of Van Gogh are shown in the Hermitage Museum. His works can be categorized in personal themes and specific periods of time among other artists from the 19th century. Until the re-opening of the Van Gogh Museum at the Museum square, lectures are given as well about the life of Vincent van Gogh every last Saturday of the month in the Hermitage Museum. . Furthermore the Van Gogh Museum offers a (Dutch) course program for people in the creative or museum sector wanting to learn more about creating a real exhibition. And various institutes did research into all the letters Vincent van Gogh wrote during his life. A website (free access) is the result of this project. The Van Gogh Museum also houses a library with a large collection of books and much more documentation to be read. And there are many ways to discover the museum for children by doing an interactive tour, go to the art studio to join workshops, go on a treasure hunt with the family or be creative on the computer. At last, there are still various research projects going on and a large international symposium is about to be organized.

Click on the map icon to get directions by car, public transport, bike or walking.