December 5
N/A
N/A
Family celebrations on December 5, also known as ‘Sinterklaas Avond’ or ‘Pakjesavond’. On this day Dutch children receive gifts and sweet treats from ‘Sinterklaas’. ‘Sinterklaas’ is real Dutch child-loving figure and looks a bit like Father Christmas or Santa Claus.
Back to Top

2014 / 2015, November 27 – January 18
various locations in Amsterdam
www.amsterdamlightfestival.com/en/
or more than fifty days, the historical center of Amsterdam will be the unique décor for this international festival. The Amsterdam Light Festival consists of two main pillars: the boat route, Water Colors (November 27  – January 18) and the walking route, Illuminade (December 11 – January 4). More detailed information about Amsterdam Light Festival.
Back to Top 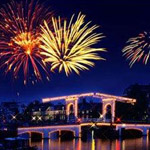 December 31
Various locations in Amsterdam
N/A
Amsterdam welcomes the New Year with many parties. On New Year’s Eve people are celebrating the event in clubs and at home. After midnight they party on the streets and squares like Dam Square and the Newmarket with a lot of firecrackers and fireworks. More details coming soon.

Back to Top
Weather forecast and climate for December in Amsterdam