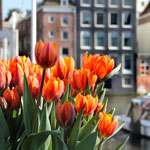 2015, April 1 – April 30
Various Locations in Amsterdam
www.nationalemuseumweek.nl
Read more information in our blog article “A bulb for every citizen of Amsterdam” 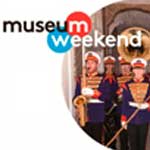 2015, April 18 – April 26
20 museums in Amsterdam
www.nationalemuseumweek.nl
With admission being reduced and lots of activities organized, it’s the ideal time to visit. Approximately 400 museums in The Netherlands traditionally participate in the event, and about 20 of those are in Amsterdam.

2015, April 27
Amsterdam, various locations and on the streets
King’s Day information 2014
King’s Day is officially the national celebration of the birthday of King Willem Alexander. Enjoy the world’s biggest street party of the year with live music, DJs, parties and street markets throughout the city. Don’t forget to wear something orange!

Back to Top
Weather forecast and climate for April in Amsterdam