Amsterdam is the bicycle capital of Europe and one of the most bicycle-friendliest cities in the world. It is the best way to get around in Amsterdam. Most of the Dutch people cycle to work despite of weather conditions. In 2012 there were about 881,000 bicycles in Amsterdam according to the municipality. That means that there are more bicycles in Amsterdam than the number of residents. With this amount of bikes it is not surprising that many bikes are stolen in Amsterdam – over 200 a day. That’s why most people use two or more slots per bike. 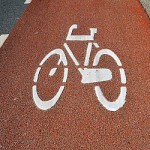 Cyclists are respected by all other traffic and most of the streets in Amsterdam have separate bicycle paths. Almost half of all the traffic streams in Amsterdam are by bike. This is the result of the safe and comprehensive cycle path network, the Dutch bike culture and city wide bike promotions. Cycling is a cheap way to get around in Amsterdam and it will keep you fit. Most of the people don’t use cycle helmets as seen in other countries. Dutch car drivers have very good awareness of cyclists and will give way where necessary. Cycling in Amsterdam is safe and therefore you will see a lot of locals cycling with their kids on special child seats or in so called cargo bikes.

Explore the city like a local and hire a bike. Riding a bike in Amsterdam is a “must do” experience. It is easy and safe, but it is good to keep a few things in mind when you hire a bicycle:

There are many places throughout the city where you can hire bikes. Note that a lot of hotels and hostels provide bikes as well.

How the Dutch got their cycle paths

Things to do in Amsterdam