During the month of February 2014, the old Olympic Stadium in Amsterdam used for the Olympics in 1928, will turn into an impressive oval ice track. This unique occasion will make it possible for everyone to ice-skate in one of the most historic stadiums in the Netherlands.

There will be “koek en zopie” (snacks and drinks), a restaurant and on Thursday & Saturday night a DJ will be playing some funky tunes. Let’s grab our skates and have some fun on the ice! You can rent skates at the stadium for EUR 6. Entrance ticket EUR 10 for adults and EUR 7.50 for kids (< 12 years). Besides the DJ on Thursday and Saturday there are other themed days during the rest of the week like a “Lazy Sunday Afternoon” with a special kids program ideal for families. 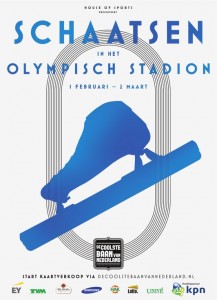 On top of that, from 28 February to 2 March, the track will be used for the Dutch All Round and Sprint Championships. This event, being held right after the 2014 Winter Olympics, will probably also turn into a celebration for the Dutch winners of any Olympic medals in Sochi. The best national skaters will compete in Amsterdam during this speed skating event.

Not convinced? Have a sneak preview with the special Live Webcam of the Netherlands’Coolest Ice Rink.
Tickets can be bought in advance online:  http://www.decoolstebaanvannederland.nl/tickets/

Orange: The New Gold from Sochi

‘
The Dutch won 23 medals at the Olympic Games 2014 in Sochi.
According to the Dutch Speed Skating Coach Jillert Anema this (watch the video) is why the Dutch are successful in Speed Skating…


And if you want to know why the Dutch like speed skating watch this video: