The Netherlands is not known for its cuisine, but you should try at least some of the traditional Dutch food items in the list below when you are visiting Amsterdam & The Netherlands. 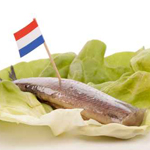 Haring or ‘Hollandse Nieuwe’ (Dutch new herring) is probably the most famous Dutch food. If you like fish you should at least try it once. The raw herring is served together with chopped raw onions and gherkins. Also the way of eating is a real Dutch tradition. In the Netherlands new herring is eaten by lifting up the herring by its tail into the air and then take a bite upwards. Of course you can also enjoy this Dutch delight by eating it in little pieces or on a sandwich called ‘broodje haring’.

Herring can only be called ‘Hollandse Nieuwe’ if the fish is caught between May and July. Also the preparation is quite special and must be done according to the Dutch tradition. The herring is cleaned, the head is removed and it is conserved in a special way (with salt). You can buy herring all around Amsterdam in shops and at street stands or book this Culinary Culture Tour in Amsterdam and try herring and other Famous Dutch Food. 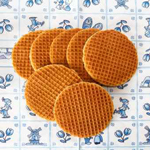 Popular throughout the world, the ‘stroopwafel’ is undoubtedly the most famous and popular pastry from The Netherlands. A ‘stroopwafel’ is a unique kind of cookie. It is a waffle made from baked batter and sliced horizontally. The two thin layers of the waffle are filled with special sweet and sticky syrup (the ‘stroop’) in between. The stiff batter for the waffles is made from butter, flour, yeast, milk, brown sugar and eggs.

The ‘stroopwafel’ originates from Gouda, a place south of Amsterdam. It was first made during the late 18th or early 19th century by a baker using leftovers from the bakery, such as breadcrumbs and sweetened it with syrup. 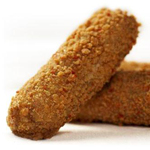 The Netherlands is not known for its fabulous cuisine. But regarding to snacks, nobody can beat the Dutch! The ‘kroket’ is a deep fried roll with meat ragout inside, covered in breadcrumbs. The common English translation of’ kroket’ is croquette. The original Dutch ‘kroket’ is made from beef or veal, but there are many different flavors like chicken satay, shrimps, goulash or even a vegetarian ‘kroket’. You can eat a ‘kroket’ as a snack, but most of the time they are served on sliced white bread or hamburger buns with mustard on the side. Be aware; the ‘kroket’ can be quite hot inside.

You can buy your ‘kroket’ almost everywhere in Amsterdam; regular snack bars, cafés, restaurants or ‘McDonald’s’ (McKroket). You can even get on the streets from one of the typical Dutch vending machines filled with hamburgers and snacks. The ‘Febo’ is such a walk-in snack bar located on different spots all over the city and famous for its ‘kroketten’. Three premium brands are ‘Van Dobben’, ‘Holtkamp’ and ‘Kwekkeboom’. 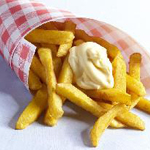 The Dutch version of French Fries has many different words: ‘Friet’, ‘Frites’, ‘Patat’ or ‘Vlaamse frieten’. They are thicker than the normal French Fries and invented in the northern part of Belgium. The Dutch really like them especially with a lot of toppings such as mayonnaise, tomato ketchup, curry or peanut sauce. A famous combination of toppings is mayonnaise, raw chopped onions and peanut sauce and is called a ‘patatje oorlog’ (‘fries at war’). It is tasty, but it does not look that way.

‘Patat’ is typically served in a paper cone or box. Here you can find the best fries in Amsterdam: 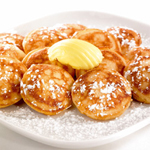 A traditional Dutch batter treat is ‘poffertjes’. They look like baby pancakes but much fluffier. They are made with yeast and buckwheat flour and typically served with a lump of butter and powdered sugar. Fresh ‘poffertjes’ are often made at an outdoor stand during winter. They are served on a small cardboard plate and come with a small fork. While butter and powdered sugar are the most common toppings; whipped cream, syrup and strawberries are also pretty common. 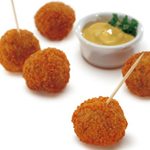 ‘Bitterballen’ are the Dutch favorite snack and can be ordered in almost every café and bar, because of its real tasty combination with beer. These savory meat-based balls are deeply fried and traditionally served with mustard. The ‘bitterbal’ has a crunchy breadcrumb coating with soft filling on the inside. Be careful when trying one, because the filling can be very hot. Inside the ‘bitterbal’ you will find a mixture of beef, beef broth, butter, flour for thickening and spices (resulting in a thick ragout). ‘Bitterballen’ are very alike ‘kroketten’ in their ingredients, preparation as well as flavor. 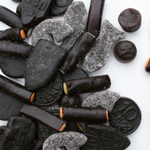 The Dutch love licorice or as we called it ‘drop’. With more than 2 kilograms per year per person the Dutch consumption of licorice is the highest in the world. You will come across it everywhere; the supermarket, the pharmacy, at the market and gas stations. ‘Drop’ comes in different flavors and sizes, but basically there are two major differences: salty licorice and sweet licorice. 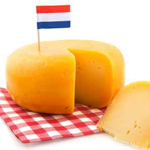 In our list of famous Dutch food we have to mention cheese. The Dutch have been making cheese since 800 B.C. Furthermore the Netherlands is the largest cheese exporter in the world. With an average of 21 kilograms per year per person, we can say the Dutch love their own cheese. The Dutch eat cheese for breakfast, on sandwiches for lunch or as a snack (cut in cubes) served with mustard at the end of the day. It tastes lovely with a glass of wine or beer.

The majority of Dutch cheeses are semi-hard or hard cheeses. ‘Gouda’ and ‘Edam’ are the most popular cheeses from the Netherlands. But there are many other types of Dutch cheese. When you visit Amsterdam you should try original Dutch cheeses during a DUTCH CHEESE & WINE CRUISE or go to the Henri Willig Tasting Room.

There are still five traditional cheese markets in the Netherlands: Alkmaar, Edam, Hoorn, Gouda and Woerden. In these cities one can see how merchants do business at a cheese market as they have done for more than 600 years. Best known markets are in Gouda, Edam and Alkmaar.

‘Hagelslag’ is a (sandwich) filling of sprinkles, although you can sprinkle it on many other types of food as well (desserts mainly). The Dutch love them, young and old, on their sandwiches for breakfast or lunch. ‘Chocolade hagelslag’ (chocolat sprinkles) are the most popular ones. Other varieties are anise (licorice) seed ‘hagelslag’ or fruit flavored ‘hagelslag’. 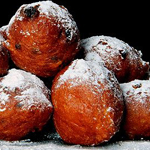 ‘Oliebollen’ are traditional Dutch food. These treats are served at New Year’s Eve and quite similar in taste to the donut. People make them at home during winter (holidays), but you can also buy them at the mobile stands on the streets in this season. ‘Oliebollen’ are usually served with powdered sugar.

‘Oliebollen’ (literally oil balls) are deep friend balls of dough. The dough is made from eggs, yeast, some salt, flour, milk and baking powder. Two varieties are baked normally; natural ones or with raisins/ currents inside. 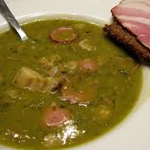 Erwtensoep or snert is made of split peas, celery, leeks, carrots and pork. This pea soup is a very thick soup. The thick ‘erwtensoep’ is traditionally eaten during the winter with slices of ‘rookworst’ (smoked sausage) and rye bread with ‘katenspek’ (a type of Dutch bacon, first cooked and then smoked).

The Dutch consider that well-made ‘erwtensoep’ should be so thick that your spoon should stay vertically in it. That is why ‘erwtensoep’ is often eaten the next day when the flavors are better mixed and the soup got even thicker. 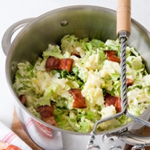 Stamppot is an old-style Dutch dish. It is made of mashed potatoes mixed with one or more vegetables like kale, carrots, endive or sauerkraut. ‘Stamppot’ is traditionally served during the winter and enjoyed best with ‘rookworst’. Several restaurants have it on their menu and there even is a small company in Amsterdam called “Stamppotje”, serving these specific dishes only. This small restaurant chain serves fresh made ‘stamppot’ during the winter and turns into an ice cream shop in summer. 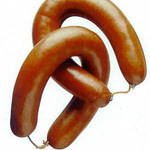 ‘Rookworst’ is a Dutch smoked sausage. It is most often eaten with ‘stamppot’ and mostly comes with ‘erwtensoep’. The taste is comparable to a hotdog, but ‘rookworst’ is bigger and the skin is a bit crispier. ‘Rookworst’ can be bought in every supermarket. Warehouse ‘HEMA’ is also known for its ‘rookworst’. Try one on a bun with a little bit of mustard. 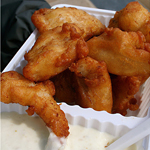 This is the Dutch variaty of fish and chips, but without the chips. ‘Lekkerbekje’ and ‘Kibbeling’ refer to battered and deep-fried white fish, commonly codfish or whiting from the North Sea. The only difference between these two is that ‘kibbeling’ is cut into chunks, while ‘lekkerbekje’ is not. ‘Kibbeling’ is served with dipping sauces like a mayonnaise-based remoulade sauce (similar to tartar sauce) or garlic sauce. You can taste this delicious seafood at the same stands on the streets or market where ‘haring’ (herring) is sold. 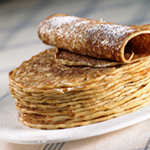 ‘Pannenkoeken’ are common around the world, but the Dutch version of the pancake is larger and thinner than the American pancakes, but thicker than a French crêpe. The Dutch like to eat their pancakes throughout the day (preferably for dinner), unlike in the United States where pancakes are served for breakfast. Another difference is that a Dutch pancake has the concept of a pizza. The pancakes are topped with one or more different items like slices of bacon, cheese, apple or raisins. A plain pancake is often eaten with sugar syrup or powdered sugar. Dutch pancakes are made of milk, flour and eggs.

The ‘pannenkoek’ is a delight for children, but anyone can enjoy a ‘pannenkoek’. A lovely way of eating a pancake in Amsterdam is by taking the special ‘pannenkoekenboot’ (pancake boat). Check out there special All You Can Eat River Cruise.