There is this legend that two fishermen found the city of Amsterdam, but more official, it goes back to the year 1275. 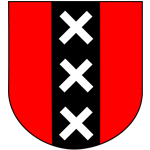 The heart of Amsterdam is ‘the Dam’. In the 13th century, the dam was built here in the river Amstel. The name of the city was born. The first ‘Amsterdammers’ were fishermen and merchants who got freedom of toll from Count Floris the 5th. It flourished as a trading center. Amsterdam’s coat of arms dates from this era as well. A figure bears the 3 ‘St. Andrew’s crosses’. Some say these 3 crosses represent the 3 enemies of the city: water, fire and the plaque.

The city developed quite rapidly and around 1613 the digging of the three main canals started. After the conquest of Antwerp by the Spanish in 1685, Amsterdam became the biggest and one of the richest cities of the world. During that time, it also became leading center for finance and diamonds. A position that would be held until around 1700. After the 80-year war with Spain, many people were drawn to Amsterdam and it became known for its relative religious tolerance. Jews from Spain and Portugal, Huguenots from France and economic and religious refugees found their safety in Amsterdam. Also the number of artists grew enormously. 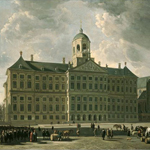 The 17th century is considered to be the Golden Age of Amsterdam. The merchants of Amsterdam had the largest share in both the Dutch East India Company and the Dutch West India Company. Therefore Amsterdam got wealthy for nearly 200 years, by establishing trading links all over the world. The reflection of this prosperity can be seen in the construction of monumental, architectural masterpieces.

After the French invasion, Napoleon Bonaparte founded the Kingdom of Holland in 1806 and his brother became King of Holland in 1810. The nation’s population rebelled. During the congress in Vienna, in 1813, it was decided that the Netherlands were to become a monarchy.

After the recession, Amsterdam recovered during the Industrial Revolution and expanded. The North sea canal was dug and connects the port of Amsterdam with the Northsea. This canal was a positive development for the Dutch economy. 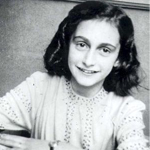 10th of May, 1940. The Germans invaded the Netherlands. Many lives were taken due to starvation and as a result of the deportation of the Jews to Nazi concentration camps. The house of Anne Frank where she and her family were hiding, is one the most popular attractions nowadays. Amsterdam lost 10 percent of its inhabitants.

After the Second World War, many new suburbs were built around Amsterdam. The society changed, many people moved to the suburbs. At the same time, the population grew because of a lot of Surinamese, Turkish and Morocco immigrants. The city center of Amsterdam got restored and restoration is still ongoing. Many of its buildings have become monuments. In july 2010, the 3 main canals (Herengracht. Keizersgracht and Prinsengracht) were added to the UNESCO World Heritage List.