The old city center with the Rokin, Nieuwmarkt (New Market), the Dam and Red Light District is the oldest part of Amsterdam with a rich history. The Dam is really the heart of the city. Here you can find the national monument which was erected in 1956 to commemorate the people who died in World War II.

The Royal Palace on the Dam is built as the town hall in 1655. The town hall was a symbol of the power and wealth of Amsterdam’s merchants. It’s called the Royal Palace, since King Louis Bonaparte took up residence in 1808. The Dutch royal family lives in The Hague and only uses this palace for official functions. 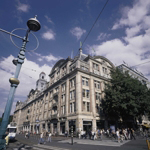 On Dam square you can find ‘De Bijenkorf’, Amsterdam’s largest luxury department store. Another large shopping area is the Kalverstraat which runs from the Dam to Muntplein. Madame Tussauds on Dam Square is a wax museum and a very populair attraction in Amsterdam displaying waxworks of historical and royal figures, film stars and sports stars.

Other places of interest:

Hotels in the Old Center