The Jordan (Jordaan) has a turbulent history. This area was built in the 17th century during the large expansion located in the West of the canal belt (Grachtengordel), as a district for the emigrants and working class. In the 19th century many political refugees (French Huguenots, Spanish and Portuguese Jews) found their home in the Jordan, because of the low rents which led to a population of 80,000 persons in 1900. Nowadays 20,000 people live there, so one can imagine the crowdedness around that time in the Jordan. Together with the open sewers and canals that were used for both transport and sewage, the Jordan area turned into a kind of ghetto. In the 19th century en early 20th century heavy riots broke out.

The theory on the origin of the name is a derivation of the French word jardin (English: garden). Most canals and streets in the Jordan area are named after flowers and trees. A second theory is that the Prinsengracht was nicknamed “Jordaan” (Dutch name for the river Jordan) and that the neighborhood on the western part of this canal got its name through the nickname. 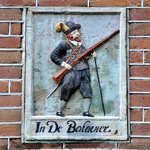 A nice detail on several houses in the Jordan area is a stone sign displaying the profession or family sign of the inhabitants. This stone tablet displays for instance an oven for a bakery and a pig symbolizing a butcher. In the 16th century citizens were instructed to use these stone tablets instead of the old big wooden gables that obstructed the traffic in the narrow streets.

On the Rozengracht (canal), the famous Dutch painter Rembrandt van Rijn spent the last years of his life because of the low rents. He was buried in a poor man’s grave in the Westerkerk (Western Church). 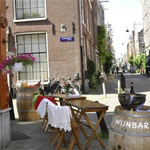 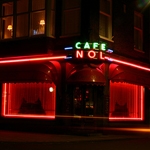 The Jordan is an extraordinary area to stroll through the picturesque and maze-like streets. Visit one of the many art galleries or have a drink in one of the typical Brown cafés in this neighborhood like ‘Café Nol’ and listen to the sing-a-long Amsterdam folk songs.
Every Saturday you will find the Lindenmarkt (a general market) on the Lindengracht and a biological food market on the Noordermarkt. Mondays a flea market is organized at the Noordermarkt. And don’t forget to visit the Anne Frank House, where she lived with her family for 2 years in the annex of the building at Prinsengracht 263.

Other places of interest in the Jordaan: