The canal belt (Grachtengordel) was built in the 17th century around the old city center. Many beautiful Canal Houses are located on the Herengracht, Keizersgracht and Prinsengracht with typical architecture for these gabled houses.

In august 2010 the Amsterdam Canal belt was added as a UNESCO World Heritage site. In 2013 the canal belt is 400 years old. A range of events and festivities will be taking place on and around the canals throughout this year. If you visit Amsterdam a canal cruise is a must to explore and discover Amsterdam.

Expansion of Amsterdam Canals & Canal Belt in the 17th Century

This beautiful animation from “Stadsarchief Amsterdam” shows how the canals of Amsterdam were build in just about 90 years.
They were not just some random 90 years though, it was the Dutch Golden Age in the 17th century. During the Dutch Golden Age the Netherlands were world leaders in trade, art, military and science.
With Amsterdam being one of the main cities in the Netherlands , the city was rich and powerfull enough to acomplish a project like the canals in such a short time.

Watch this great 5 minutes video about the Amsterdam Canals and Canal Belt history and you are ready for Amsterdam!

Shopping in the Canal Belt 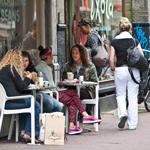 The 9 streets (de 9 straatjes) is a very popular shopping area within the canal belt.  Small monumental and unique boutiques, the best 2nd hand shops, hotspot restaurants and bars between the main canals Herengracht, Keizersgracht, Prinsengracht and Singel make these cobbled lanes themselves loved by everyone. This is one of the city’s best areas to wander all day.

Amsterdam’s main entertainment areas are also situated in the canal belt.  The Rembrandt square (Rembrandtplein) is packed with restaurants, pubs, cafes and clubs. In this area you will also find gay venues in the Reguliersdwarsstraat. Starbucks “The Bank” on the Rembrandt Square is situated in the old vault of a bank and is the first concept store of Starbucks in Europe. 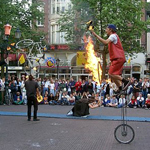 The Leidse square (Leidseplein) is a colorful and lively nightlife area with cafes, coffee shops, theaters, restaurants and famous clubs such as ‘Paradiso’ and ‘Melkweg’. In summer, the entire square is filled with locals and tourists enjoying the sun and having drinks on the terraces.  Every winter you can skate on the ice skate track.

Stay on a Houseboat Along The Canals

Enjoy the privacy, the views and the unique experience in some of Amsterdam’s most charming spots. Stay on a houseboat for a few nights to get a different view of Amsterdam from the water. Most houseboats in Amsterdam are fully equipped so you can cook your breakfast and dinner in your own private kitchen. In Amsterdam you find most of these houseboats along the famous canals.

Other places of interest in the Canal Belt:

FREE cancellation on most rooms! • Instant confirmation when you reserve