Accept from the luxurious canal houses, Amsterdam has many architectural treasures. Between historical buildings, one can find modern architecture as well. Design lovers can see all sites of interest in Amsterdam within acceptable distance.

The oldest area of Amsterdam is known as ‘de Wallen’ (the quays).  In this oval shaped area, one can find the famous Red Light District. The main street ‘Damrak’ connects the city center with Amsterdam Central Station in the north. To the south of the heart, the Jewish quarter of Waterlooplein. These areas are surrounded by the 17th century canals, also known as ‘de Grachtengordel’. 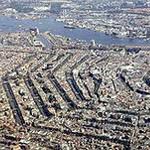 Amsterdam counts 1281 bridges all over the city, 220 bridges that link the canals are illuminated at night. The former working-class areas are situated outside the canals, the Jordaan and the Pijp. Other interesting areas can be found here as well, such as the Museum square, Plantage Neighborhood and the Vondelpark.

World famous are the luxury canal houses. On the houses, there is quite a variety of gables. Step- gables date from the early 17th century. In the next century, many of these gables were replaced by neck-bell- or frame-gables. And in that time, gable stones served the same function as numbers nowadays. 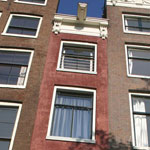 Remarkable is the smallest house at 22 Oude Hoogstraat; width of 2 meters, depth of 6 meters. The most beautiful canal houses are situated on the ‘Golden Bend’ along Herengracht. Most of the houses were owned by rich merchants. Nowadays there are hardly any private houses, because the real estate prices are very high.

The land on which Amsterdam was built used to be a swamp area. This means it is very difficult to build anything. Before building a house, wooden piles are driven into the ground to function as the foundation for a house. Some of these wooden piles are in the water for ages, but still in good condition because they cannot rot under water. Therefore control of the groundwater level is very important. Remarkable are the ‘leaning’ houses; the wooden pole foundation was exposed to oxygen or not enough piles were used at that time. 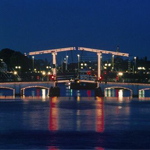 There are many bridges in Amsterdam, but only one became a real symbol for Amsterdam: the Skinny Bridge (‘de Magere Brug’), built in 1691 on the river Amstel. Because the bridge was quite narrow, the people called it ‘skinny bridge’. Through the years it got replaced and repaired and the present bridge dates from 1934. Ever since it needs to be repaired and renovated every now and then. At night, this bridge is beautifully illuminated.

The oldest building of Amsterdam is The Old church. It is located in the middle of the Red Light District. The place where the first inhabitants built a chapel around 1300 and later became the impressive medieval monument. Because of its various functions, the church got its nickname ‘Amsterdam’s living room’.

Building styles throughout the ages

In the 16th century many wooden buildings were replaced and constructed for brick ones in Renaissance style. There are only two wooden houses remained. Amsterdam’s oldest house ‘het Houten Huys’ is situated at the Begijnhof, built in 1460. 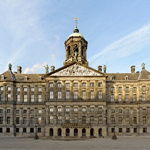 In the 17th century, baroque style became popular. A famous building in this style is the Royal Palace on Dam square. Later on, in the 19th century other styles were introduced, such as Jugendstil or Art nouveau, followed by Art Deco. The city was expanding rapidly in this period and many buildings were constructed in these new architectural styles. Most buildings from that era can be found in the areas outside the city center. But there are also a few in the city; the Tuschinski Theater (cinema- Regulierbreestraat) or the American Hotel (leidseplein) with their great interiors. 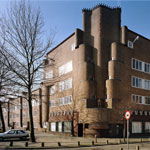 Amsterdam designers created their own style: the Amsterdam School Style (Amsterdamse School). The largest number of buildings created in this style can be found in Amsterdam, but in other places they also constructed buildings in this architectural style. The Olympic Stadium in the south, the ‘Scheepvaarthuis’ at the Prins Hendrikkade (opposite of Central Station) and houses at the ‘Spaarndammer-area’ are a few examples for Amsterdam. There are also a lot of bridges designed in the Amsterdam School Style.

In the 20th century, modern architecture still lives on in and around Amsterdam. Architects designed the New Islands in the north of Amsterdam. These islands are built in a modern style with remarkable bridges. 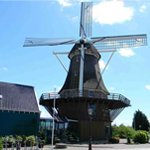 Since the 13th century, windmills were used in the Netherlands. There are still 8 windmills in and around Amsterdam. Even most Amsterdammers don’t know that the capital counts these 8 mills. There is one watermill on the Amstel river. It is a 17th century mill pumping the water from the ditches and canals behind into the river Amstel. All other 7 are windmills. However there is only one open for public (daily from 10am until 4 pm, accept during public holidays): ‘Molen van Sloten’, situated at Akersluis 10. This windmill was built in 1847 and still in use keeping the surrounding land dry. The miller gives guided tours and demonstrations. A presentation about Rembrandts life is shown as well. This mill is also a popular wedding venue.

If you go sightseeing, you will find more fascinating windmills outside Amsterdam. Go for a 15 minutes train ride to ‘de Zaanse Schans’. This is an open air museum with windmills and free of charge.